How to Keep a Pool Cover from Sagging (4 cleaver Fixes) 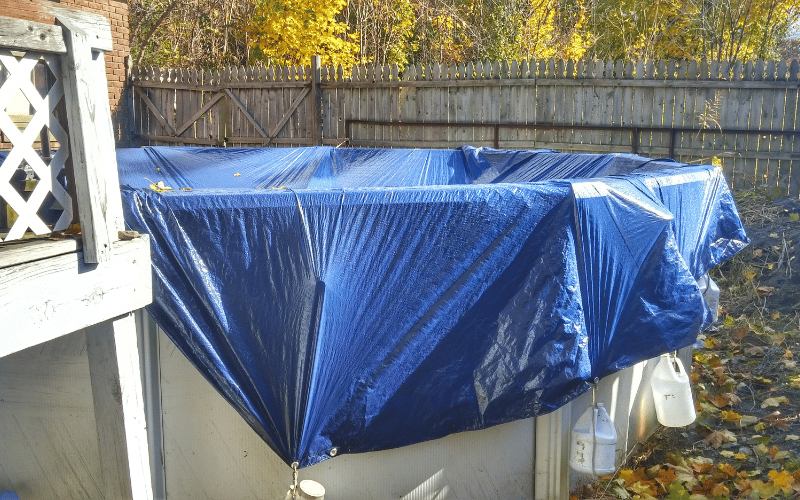 Although a pool cover can be used in many ways, depending on the model, there are different possibilities, there are some pitfalls associated with its handling, both when used in the summer, but also in the autumn and winter months.

It often happens that the pool cover hangs in the water, and you have to prepare it with a lot of effort afterwards again for an optimal use. To ensure the ideal function of your cover tarpaulin constantly, some steps can be taken to prevent it from hanging in the water of the pool in the first place.

What is the purpose of pool cover tarps?

Tarpaulins for a pool with the function of covering it, there are numerous variations as well as different designs, although not all of them are also suitable for every pool. They are mostly used during the colder months of the year and are an integral part of the winterization of a pool, however, the use of a pool cover is also very worthwhile during the summer months.

Pool covers are used especially when a pool is not used for a longer period of time, as they reliably protect it from dirt such as falling leaves, pollen, but also insects.

Furthermore, a pool tarpaulin counteracts temperature fluctuations of the water, which could lead to a negative change in the chemical properties, and, provided the tarpaulin is completely opaque, inhibits the growth of algae. Special safety tarps are also able to prevent children as well as animals from falling into the pool, which can cause serious injuries.

4 Tips Against The Pool Cover In The Water

In order for a pool cover to have a lasting positive effect on your pool, it must be attached according to the specifications of the respective manufacturer.

There are several solutions to prevent the pool cover from falling into the water and having to be laboriously reattached or removed from the water. The four most effective tricks are explained in the following sections.

Trick 1: Use a pool ladder

A creative solution, although not obvious at first glance, is to use the ladder of your pool, if it is part of the individual accessories. If it is possible to place it in the middle of the pool, water from above, including rain or snow, can run off to the outside over the edge or into the holes of the tarpaulin.

Since the tarpaulin often falls into the pool water due to the action of external pressure, this is an efficient protection against it. 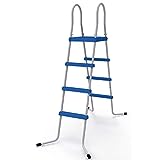 JLeisure 48 Inch 3 Step with
If you click this link and make a purchase, we earn a commission at no additional cost to you.

Trick 2: Use a bathing island

A similar effect to the use of a pool ladder can also be achieved with a bathing island placed in the middle of the pool. Depending on the size, this will also cover up any holes in the cover so that in the event of heavy rainfall, no additional water enters the pool, which might then have to be drained again.

Another advantage of using a swim island is that if the drains are adjusted accordingly, it makes it much easier to attach or retrieve the cover.

Swimline 9050 - 72" Swimming Pool
If you click this link and make a purchase, we earn a commission at no additional cost to you.

Trick 3: Weigh down the pool cover

In addition to the options already mentioned, you should pay particular attention to weighting the tarpaulin for your pool, if this is possible due to its individual characteristics. Out of water options for this include sandbags or round stones, although you should definitely avoid bricks because of their sharp edges.

Also, make sure that the pool cover does not sag at any point, as only a tight surface will ensure proper functioning.

Depending on the particular type, with a pool cover you can basically distinguish between commercially available models made of PE tape fabric, inflatable covers as well as safety or pole covers, different types of fastening are offered.

These also vary depending on the specific ground or the characteristics of the individual pool type, whereby you can either create a certain stability with tension belts, or also by anchoring in the ground, if it is soft enough.

In the case of a frame pool, for example, it is advisable to tie the cover to the frame so that it does not run the risk of hanging into the pool.

What do the holes in the cover do?

Not every tarp for the pool has holes, however, there are a lot of models where they are already integrated into the design, so in any case it is not a mistake in production, especially if the recesses are uniform, this is very unlikely.

In case of rainfall, the holes serve as a way of draining the water volume, thus preventing the tarpaulin from sinking into the basin of your pool. When not in use, it should be stored safely inside a dry building.

Are there alternatives to pool cover tarps?

There is a wide range of tarps available for pools of all sizes as well as shapes that can respond to a wide variety of local weather conditions. In addition to walk-on, winterized, electric as well as inflatable covers for your pool, cover sheets are also available. So-called pool enclosures are another option, with these being used either year-round or only during the hot months.

Especially during the cold season, an (opaque) pool cover should be used for optimal winterization, ideally for example in combination with air cushions, so that the water and the installed materials of your pool are protected from contamination, damage caused by ice as well as increased formation of algae.

In the case of children or animals that could potentially fall into the pool, instead of a safety tarp, for example, a physical barrier is an alternative that can also be visually integrated into the garden. In the summer, it is possible to remove dirt caused by insects or leaves with a landing net or a vacuum cleaner for the pool, but depending on the location, a pool cover is advisable for a constant water temperature, apart from the fact that it also complements other measures of pool maintenance to make work easier.

A pool cover is useful in many circumstances, ranging from the presence of children or animals that you want to protect from injury, to regulating the temperature of the pool water, to preventing frost damage.

To ensure that the pool cover does not sink into the pool due to pressure from above, for example, accumulated snow or rainwater, or due to the influence of the wind, certain precautions should be taken. These measures range from the central placement of a swimming island or pool ladder to an adequate attachment or weighting and are, adapted to the individual situation on site, quite recommendable.